What is Draft Mode?

Draft Mode is a game mode unique to Project Ascension. Every 2 levels you will draft 3 spell cards and choose between 1 of them. These spells can come from any classes' spells available for your level or below. This presents you with the challenge of creating the most powerful build you can from what you can draft, essentially creating a deck of abilities.

As you grow in levels and begin to fill out your deck with more and more powerful abilities, you gain the ability to assign talent points into any talent tree you want. Draft Fireball and Sprint? You can invest in Improved Sprint and Improved Fireball. Talents have no investment requirement, so you can empower the abilities you draft with no restrictions.

The journey does not end at max level. You will earn Hand of Fates through Daily quests which will require you to complete challenging end-game content. Overcoming these obstacles will allow you to redraft spells and refine your Hero, creating your ultimate class fantasy.

Every Draft will give you the choice of 3 abilities to pick from. Click each card to reveal the spell you drafted!

Picking your spell from the drafted cards:

Click the Learn Button at the bottom of the card to add that spell to your deck (and your spellbook). Drafting lower level spells at higher levels will still need their ranks trained. You can visit any class trainer in a capital city or use a Book of Ascension.

Notes on the Cards:

When players find new abilities in Draft Mode, they will be able to know immediately when they've found something really special or especially rare. When a Player drafts a spell, they will notice a Card rarity, a glowing border around the card. The rarity of a Card can range from Common, Uncommon, Rare, Epic or even Legendary.

Common cards contain spells and abilities such as Frostbolt, Sinister Strike, Incinerate, etc. Spells and abilities placed in common are there as Foundational skills and allow for any player to find them most easily to start building for that specific build you want.

Uncommon cards contain Buffs and beneficial spells and abilities such as Thorns, Mark of the Wild and Blessing of Wisdom. Spells and abilities placed in Uncommon are there as modifiers and play an important roll in optimizing any player's damage, healing or ability to take damage.

Rare cards are often Passive powers, Truestrike Aura, Water Shield, etc. These will give your character the edge over someone that lacks these Rare cards.

Epic cards contain Crowd Control abilities such as Blast Wave, Polymorph and Death Coil, as to prevent a Meta based around locking your Opponent out of the game and making it unfun all around, these have been made hard to get, but equally so, rewarding to get your hands on.

Legendary cards are the rarest and hardest to get, they hold Utility spells and abilities that would have Universal appeal and would fit into any build, these include Blink, Ice Block and Divine Shield all fall under Legendary.

As a way to prevent those of you who are unlucky from never finding a Legendary and those of you who are extremely lucky getting nothing but, there has been a balancing system placed in to keep things fair. The more of a Rarity you have, the less likely you are to find another. Meaning, if you have gotten a Legendary, the harder it will be to get another one, but if you have no Legendaries the easier it will be to find one. Through this too, the player has influence over the RNG system, no longer will you need RNJesus to help you get Blink. Now, you will know that unlearning Epic cards will increase your chances of finding another.

Each spell has a rarity between Common and Legendary

You can determine what rarity a spell is by opening your Character Advancement window:

You can open the Character Advancement menu by selecting the book icon on your minimap, hitting the up arrow icon in your menu bar or by hitting the 'N' key. 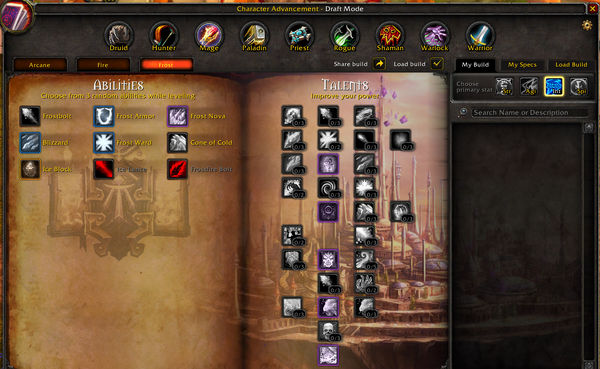 Why are Uncommon Cards Important? 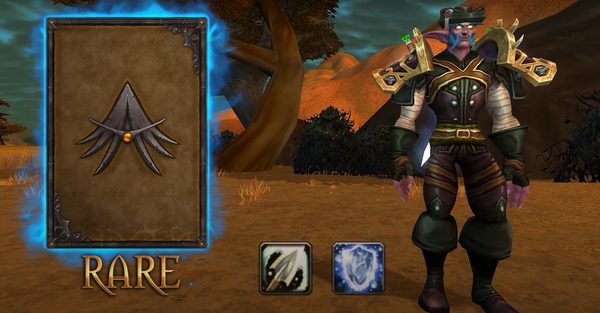 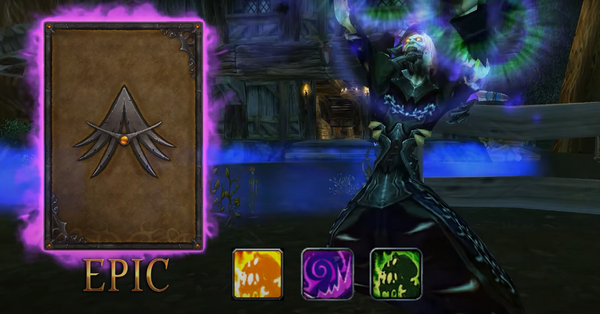 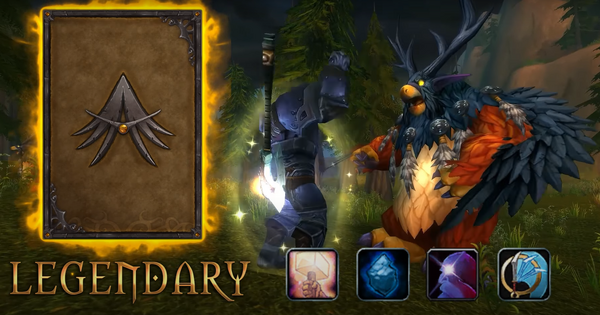 Skill Cards are special cards usable at level 1 that guarantee you will roll that specific ability while leveling. Earned at max level, Skill Cards can be mailed to other characters on your account and used on a fresh alt, or they can be used if you choose to Prestige your max level character.

You can turn the skills cards you don't want into Professor Thaddeus Paelo via the Sealed card options to get brand new sealed cards. You can find him next to Silas Darkmoon in any of the major cities (Stormwind, Orgrimmar or Shattrath). 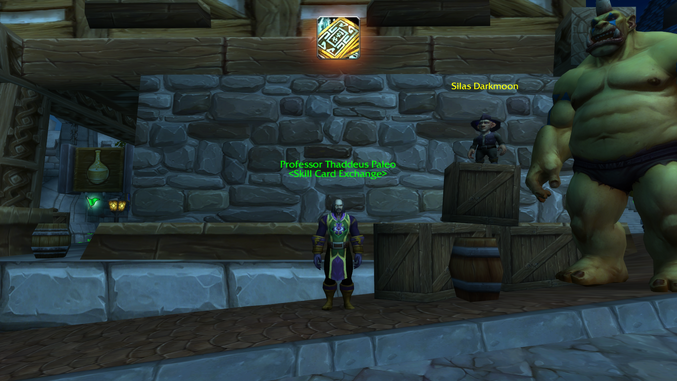 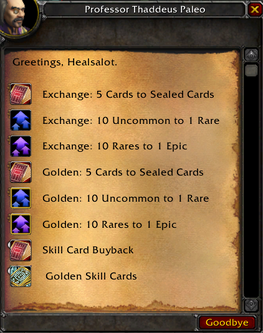 In addition to these, each Sealed Skill Card you open will grant you a Darkmoon Ticket.

You can talk to Silas Darkmoon about the Darkmoon Ticket Prizes. 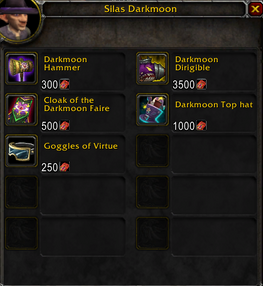 He will provide you with 3 options;

You can spend your Darkmoon Tickets to get various prizes from cosmetics to skill cards which will add flavour to your journey.

You can only roll abilities that you are qualified to receive level-wise. For example, you can not roll a lvl 40 ability when you are lvl 10. As such, at lvl 1 you can only roll abilities that are available at lvl 1. Skill Cards act as learned spells when determining your chance to roll higher rarity spells. If you skip your Skill Carded ability at that level, it will no longer affect your chances.

While you are given a spell at random, there is some logic in place to help avoid getting a spell you cannot use at all. For example you would not get Maul without Bear Form, or a Judgement spell without a Seal. But if you were to take for example Bear Form, you will have a greater chance to receive skills that can be used in Bear Form.

While you may not have full control over how your character develops, there is plenty you can do to ensure you achieve your full potential. You may not be the one selecting your spells and abilities, however you can determine your attribute point distribution, talents, and equipment. You will even be able to re-roll some abilities occasionally if you find that it truly lacks any place in your build by using a Hand of Fate.

For the first 9 levels you will not gain any Ability Essence. From level 10 onwards you will gain one Ability Essence and one Talent Essence every time you level up. This means you will get a selection of three new skills every 2 levels.  As stated before, you can't learn skills that are above your level.

If you accidentally press the X button in the top right of your selection, don't worry. Your choices are not gone! They are simply minimized, open these selection screen again by pressing the book icon button:

You can check how many Talent Essence you have by going to your character Currency tab, or by clicking the Character Development bubble and looking in the top right corner. [1] ===Talent Abilities=== You may notice some talents require Ability Essence to acquire. In fact most talents that would have originally required a single talent point to master will cost some number of Ability Essence along with a Talent Essence. You can only learn these through random rolls. Trying to learn these through your Specialization tree will not work. You can also not unlearn these unless rerolled with a Hand of Fate card. More on the Hand of Fate cards below.

Silas Darkmoon can be found in all capital cities and will offer you a quest for free Hand of Fates every 10 levels, starting at level 10.

Here is how a Hand of Fate card works:

Note that these abilities also require 1 Talent Essence to learn.