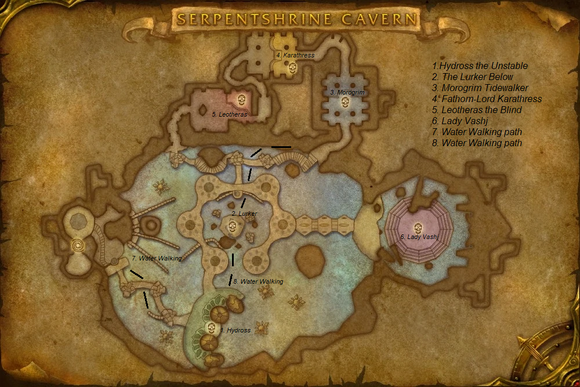 Serpentshrine Cavern is a Raid in the The Burning Crusade expansion, housing 6 encounters total, with Lady Vashj as the final boss.

To gain access to Lady Vashj on Flex Heroic difficulty, you would need to defeat 4 encounters, Hydross the Unstable, Morogrim Tidewalker, Fathom-Lord Karathress and Leotheras the Blind.

To gain access to Lady Vashj on Ascended difficulty, you would need to defeat all 5 encounters (The Lurker Below included).

Within Serpentshrine Cavern you will mostly find groups of Naga, Coilfang collaborators and Murlocs, with the occasional Lurkers and Colossus.

In the groups of Naga you will find the Guards with Spell Reflection, Priestesses with heals, Witches with domination and Mages with high damaging spell casts. Interrupts and stuns are adviced.

The Undebog Colossus have a random set of 2 abilities. 1 of these abilities will be cast while alive, and the other will manifest itself on death. In particular you want to pay attention to the Fatal Injection, that will continue to stack itself until cleansed properly. Reacting instantly to cleanse this is key to smoothly clearing trash, while also paying attention to the Toxic Pool on death, dealing massive damage.

Entering Morogrim's domain, you will encounter Murlocs, where you should pay extra attention to the Tidewalker Shaman, casting Chain Lightning. Interrupt this cast, as it is prone to one-shot players.

Entering Leotheras' domain, you will encounter Lurkers and Greyheart collaborators. Among these you should pay attention to the Lurkers and Greyheart Nether-Mages. The Lurkers will spawn exploding mushroom on all player positions, so it is advised to stack and rotate, while the Nether-Mages casts Arcane-Lightning, which should be interrupted because similar to Chain Lightning, it has a tendency to one-shot players.

Community content is available under CC-BY-SA unless otherwise noted.
Advertisement